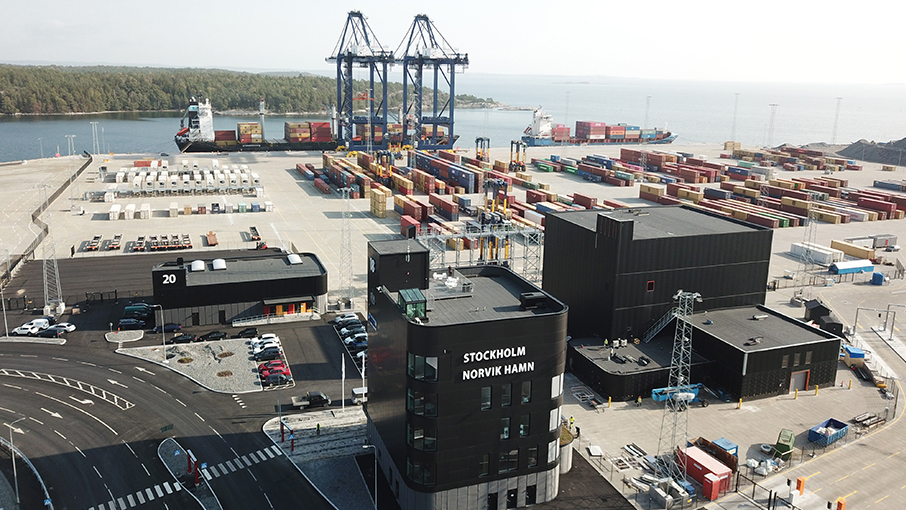 “Together with all of Ports of Stockholm and the contractors involved, it gives me great pride and pleasure to receive the prestigious Årets Bygge 2021 construction prize. Together we succeeded in meeting the time schedule on budget in this complex project, while at the same time prioritizing safety and working environment,” explains Karl Lagerlöf, Chief Operating Officer at Ports of Stockholm.

The jury issued the following statement:

“The overall winner of Årets Bygge 2021 is not a single construction – but several complex constructions in one. Roads, bridges and buildings have been connected together with a railway line, tunnel and a world class cargo terminal. The budget and time planning was impeccable, the collaboration of the 40 different contractors was impressive and the injury statistics were unbelievably exemplary. The ship came in! What did it bring? Winner of the Årets Bygge 2021 construction prize: Stockholm Norvik Port. Many congratulations!”

The first spade in building Stockholm Norvik Port broke ground in 2016. The project has involved 40 building contractors and all disciplines of the construction industry have been represented. Stockholm Norvik Port is the first completely new major freight port to be built in Sweden for decades. The port area covers 44 hectares.

A four kilometre-long railway line has been built to the port, as well as a railway yard, new roads, several bridges, a tunnel through the hillside, six major buildings, the port’s own water reservoir and electrical power installations of small city capacity.

Projects compete for the Årets Bygge 2021 construction prize in six separate categories: Residential housing, Hotels and offices, Infrastructure, Industrial buildings and commercial properties, Community properties, and Renovations. A winner is announced in each separate category, as well as an overall winner.