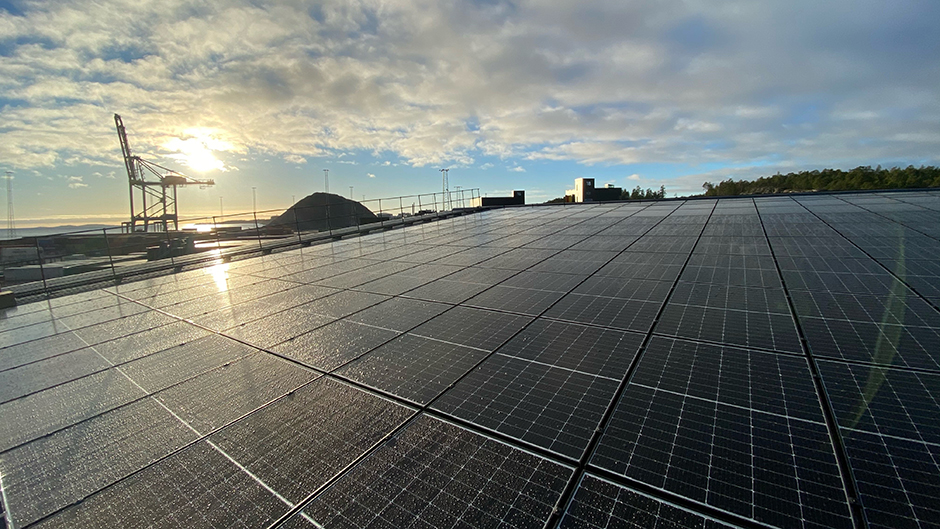 Ports of Stockholm’s commitment to renewable energy continues with the installation of a rooftop solar cell facility at Stockholm Norvik Port that will be one the biggest of its kind in Sweden. The solar cell system went live on the darkest day of the year.

On 21 December, the darkest day of the year, the first part of the new solar cell system at Stockholm Norvik Port came into operation. The facility is installed on the 3,800 square meter roof of a large warehouse. When fully completed, the solar cell system will cover 3,500 square meters, almost the entire roof area. The facility will be also able to produce up to 570 MWh of solar electricity per year when fully completed in 2021/2022.

Idola Solkraft is the turn-key contractor supplying, installing and bringing the facility online. Installation of additional solar panels and equipment will continue already in January 2021.

“Thanks to our solar cells, Ports of Stockholm will be able to generate a significant amount of its own power requirements within the port area, providing substantial savings both financially and environmentally,” explains Mats Ström, Idola Solkraft Sales and Marketing Manager.

Ports of Stockholm already has five other solar cell system facilities. The first and largest of these went live in 2013 and is on the roof of a building at Frihamnen port in Stockholm. Read more about these facilities

How a solar cell facility works

When the sun’s rays reach the panel, which consists of many small solar cells, an electrical charge is generated between the silicon layers in the solar cell. This charge is converted to direct current. The direct current is conducted via cables from the solar panels on the roof to an inverter that converts the direct current into alternating current. Alternating current is the normal type of electricity used in buildings. The inverter is connected to a distribution box, and the electricity is then supplied to the buildings and used in all power sockets.