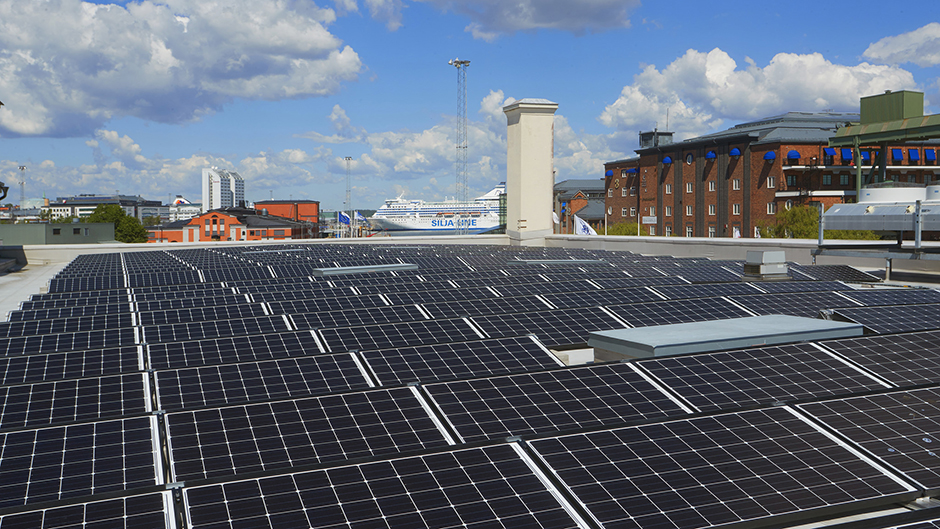 On the same day that the tax for solar energy becomes almost negligible, Ports of Stockholm is renewing its commitment to photovoltaic systems by bringing a brand new system into operation at the Frihamnen port.

On 1st July the tax imposed on solar energy will drop substantially*, which has resulted in Ports of Stockholm once again committing to photovoltaic systems in the company’s efforts to become a fossil fuel-free operation. An entirely new system will come into operation on 1st July on the roof of the Banankompaniet building at the Frihamnen port. The system will have a power output of 83 kW and the electricity will be used to power the building.

“The reduction of the solar energy tax on 1st July means that photovoltaic systems can continue to expand at a rapid rate in Sweden. Ports of Stockholm is an excellent example of a company that is now continuing to establish photovoltaic systems on the roofs of its buildings. This is a direct effect of the new legislation,” says Johan Öhnell, Public Relations Officer for the Swedish Solar Energy Commission (Solelkommissionen) and Chair of Solkompaniet.

“It feels excellent to be able to resume our commitment to solar energy as a part of Ports of Stockholm’s goal to become a fossil fuel-free operation. The tax reduction means that this once again becomes financially viable,” says Stefan Hansson, Chair of the Board at Port of Stockholm.

Including the new facility, Ports of Stockholm has five photovoltaic systems. The first, and largest, came into operation as early as 2013 on the roof of the Magasin 6 building at the Frihamnen port.