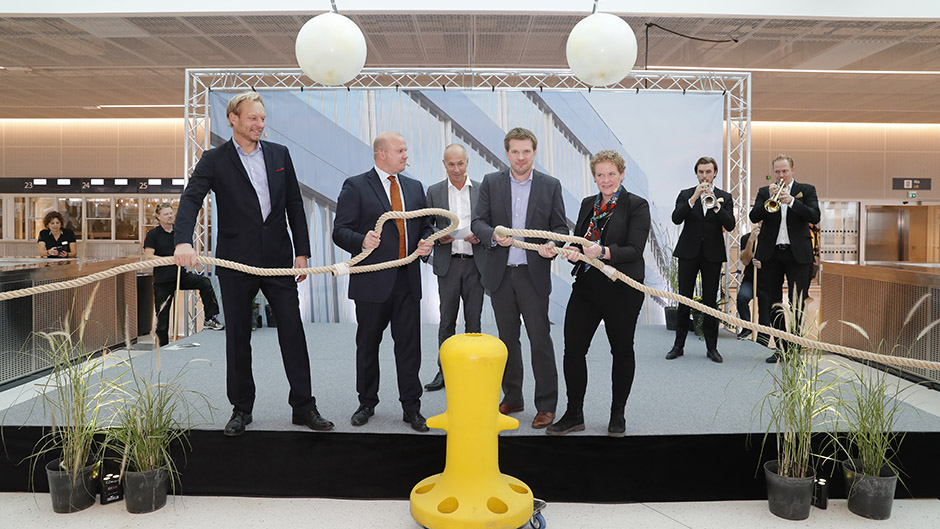 Ports of Stockholm has expanded Stockholm by 85,000 square metres, and built a new pier and passenger terminal. Today the new Port of Värtahamnen and Värta Terminal were officially inaugurated.

Värtahamnen has been under reconstruction since 2013. The rebuilding is part of the development of a completely new city district in Stockholm, the Stockholm Royal Seaport. Ports of Stockholm has built a new pier and passenger terminal, which the ferry operations at Värtahamnen have now moved to.

The concentration of port operations to the pier has freed-up 85 000 square meters of land for urban development, making space for 12 000 new homes and 35 000 workplaces. At the same time a new landmark has been created in Stockholm. The Värta Terminal, which has been designed by architect firm C.F. Møller, is a light, expansive and pleasant space for both ferry passengers and the general public.

“Eleven million passengers pass through Ports of Stockholm every year. They contribute consumer spending of MSEK 5 000, fill the equivalent of seven hotels every day of the year and generate 4100 full-time jobs in the region. The ferry industry is important for Stockholm. It is exciting to see how Värtahamnen has developed and has contributed to the development of the Stockholm Royal Seaport,” says Karin Wanngård (S), Mayor of Stockholm.

It has taken three years to build the new Värtahamnen port. The work has been carried out while the port continued to operate and has had high work environment and environmental targets. There are only a few tasks remaining in the harbour basin before the entire project is completed at the turn of the year 2016/2017.

“The Värtahamnen project is one of several current projects that are transforming our ports. We are experiencing a historic era. We are adapting Stockholm’s ports to equip them for the coming century, with the integrated development of port and city. Port operations are important for both tourism and for the sustainable transport of goods to and from the Stockholm region. Achieving a modern and green terminal and functional logistics at Värtahamnen is an important first step,” explains Johan Castwall, Ports of Stockholm Managing Director.

With direct connections to the Norra länken motorway, the traffic infrastructure to and from Värtahamnen is well served and the new Värta Terminal will be an integrated part of the construction of the Royal Stockholm Seaport.

“This is a historic moment and means significant improvements for our 4.5 million passengers who pass through the Port of Värtahamnen each year. Over the long-term it benefits the entire region. Our operations will be a natural aspect of everyday life in the new city district, with the port just around the corner. It feels really good and inspiring to move in to our new offices, located at the heart of the pulse of operations,” says Marcus Risberg, Chief Executive Officer, Tallink Silja Sweden.

To images of the inauguration, Värtahamnen, the Värta Terminal and art at Värtahamnen (external link)